skip to main | skip to sidebar

We left my brother's place about 8 am and decided to have breakfast at Banana Pepper in Waihi before continuing on to Rotorua.

The visit to Rotorua was quite emotional for me as it brought back a lot of lovely memories from my childhood. My family come from this area, right back for about five generations. We have a lot of history including kidnappings, slavery, dreadful tragedy, beautiful singers, famous (in NZ) people and gifted family members. I'll put a post up one day about my family's history. It's too long to do so now.

We travelled to Rotorua via Tauranga where a lot of New Zealand's fruit is grown. I was amazed to see mango orchards...I thought New Zealand would be too cool for them. The trees were fairly young but I'll be most interested to see what sort of mangos are produced.

We arrived in Rotorua about lunch time and, as we had bought our lunch from Banana Pepper, I drove to the shores of Lake Rotorua and we sat in the sunshine and ate our lunch. We watched a seaplane land and come to shore, then a large black helicopter landed and discharged some sightseers. I found out later my cousin owned it...wish I'd known earlier.

After a drive around to show Gabbie a bit of the city, we found our motel and checked in. To Gabbie's delight, it had a huge spa pool...but more about that later. In the motel Gabbie found a folder of sights to see and things to do, so I let her choose what she wanted to do. She elected to see the cultural show and partake in a hangi lunch. We duly drove out to Whakarewarewa where my family were born. There is a Maori village there and lots of steaming hot pools and mud pools. I used to play there as a kid, running with the other Maori kids from the village around all the pools...none of us was injured. If we'd fallen into any of the pools, we'd have been dead meat...literally boiled!

As I say, that used to be my childhood playground and this day I had to pay $25 each for the guided tour, much to my chagrin. That's progress for you. So we had the guided tour and Gabbie was fascinated, especially by the steam coming randomly out of the ground. After the tour through the village, we sat down and waited for the cultural show to begin.

The Maori are the most beautiful singers...they sing in very close harmony of three or four parts and I was quite overcome hearing the familiar songs and seeing the dances we learnt at school. It was such a big part of my life and I hadn't realised how much I missed it all. Gabbie thoroughly enjoyed it and loved the fact that this is part of who she is. She's very interested in the family and our history. During our trip to New Zealand I was able to tell her all sorts of bits and pieces that were brought back to me in places we visited.

We were too late for the hangi luncheon so decided to go back early the next day. However, poor Gabbie finally succumbed to her sore throat and ended up with a lower respiratory infection so that evening, I took her to the doctor, who prescribed her antibiotics and ventolin, as she was also wheezing.

Now one thing I must add here, is that Rotorua, being on the fault line of the so called Pacific rim of fire, has a perpetual sulphur smell. I love it, but it can cause havoc with breathing in anyone who is prone to asthma. Needless to say, I was using my inhaler fairly frequently and of course, the sulphur got to Gabbie too, hence the ventolin for her.

We finally returned to our motel. I asked Gabbie if she was hungry and being a normal teenager, no matter about her infection, she was so we went up to the corner to a Chinese restaurant that, as well as Chinese food, sold fish and chips. There had been a competition in New Zealand for the best fish and chip shop and this place was the regional winner.

After dinner, we waddled our way back to the car, to our motel unit and started to fill the spa pool. 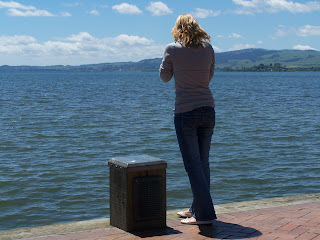 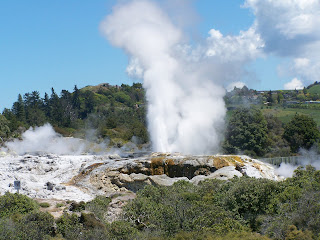 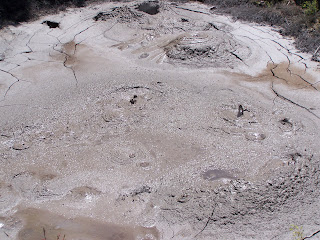 One of the mud pools...we used to call them porridge pools. 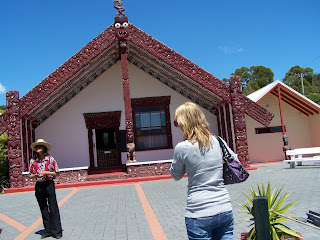 The village marae or meeting house. When we had our family reunion in 1972, a lot of us slept on this marae. 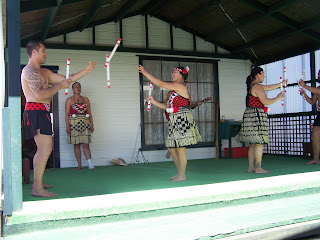 A rhythmic stick game. I learnt these as a kid. However, I don't think my hand/eye coordination would be up to it now! 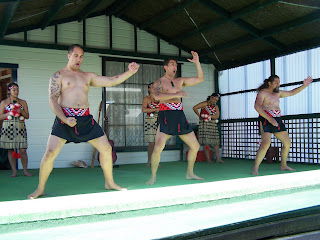 The haka, a war dance to scar off the enemy...very loud with lots of eye rolling, tongue protrusions, chest slapping and stamping...very masculine. 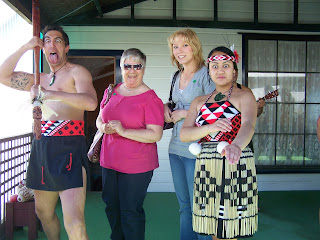 Me and Gabbie with a couple of ferocious looking locals. 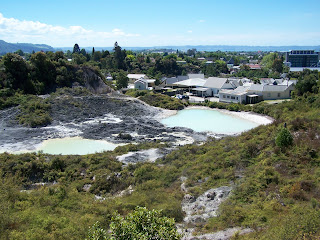 From a lookout overlooking the modern part of the village...the souvenir shops and cafes. Those large pools are very hot.

It must have been wonderful to visit your old stomping ground.
I was born, raised and have lived my whole life right here in Bellingham, WA. USA. I can't imagine being anyplace else. In fact I live just across the street from the little house where I grew up.
Your pictures show what a fun time you had. Thanks for sharing.

What an interesting place (for me) where you spent your childhood ! I have to read National Geography or watch special TV channels to see a Maori !

I'm so enjoying reading about your trip to NZ. I laughed out loud when I saw that picture of you, Gabbie and a couple of ferocious looking locals...that's quite the facial expressions they have! hehe Such beautiful scenery, I would love to be able to see a geyser in person. Isn't it such an awesome feeling, being able to go back to your childhood grounds and visit places that you remember as a child. xoxo

Just catching up on the holiday and had to red 1-2 &3 before this one number 4 and still can not believe you have been and are back again............gosh time rushed past.

I do see you had a great time.

Ramblins of a middle-aged goddess said...

Robyn, thanks so much for including pictures..this so helps with your story and vacation!! Boy that granddaughter of yours is a cutie plus she is so tall. We have a very tall granddaughter too. I am so happy that you got to go back to where you grew up. What made you move to Australia?

We loved Rotorua. I remember swimming in a naturally heated pool there and thought I would almost fry from the heat. I couldn't get my husband to go in passed his ankles though. Glad to see you're having a wonderful time.

Dear Robyn ~~ What a great time you and Gabbie had and the pics are very
nice to illustrate places you went to
So you got ready once in 10 minutes ~
well done. Never to be repeated. Sorry you are feeling the humidity up there with all the rain. We have had some good rain, but don't get the humidity. (Thank goodness.)
Take care, my friend, Love, Merle.

Wow that was a cool cultural experience, and an awesome place to have grown up in. I had no idea you had Maori ancestry, that's cool! Sorry to hear Gabbie got sick, that must be weird to always be smelling sulfur, I guess you'd get used to it after a while. Hope you got a part 5 to your New Zealand adventure :)

We stopped in New Zealand when we travelled to England by ship. I remember the Maoris coming on board and singing and dancing for us and they were also using those "balls on string things" (sorry I don't know what they're called). I can still remember their amazing voices.

What a wonderful trip for you to share with your granddaughter. It will be something the two of you will always remember.

Hmmm I thought I commented on this when you first posted.
!@#$ Blogger

I thought Rotorua was a beautiful place once you got past the smell of the sulfer.
I went to a Maori wedding and a few days later to a hangi.
I ate so much great food they needed a wheelbarrel to get me out of there.
It was quite the experience and I would recomend it to anyone who goes to New Zealand.
First we went to a traditional Maori village where everyone was in traditional Maori clothes and they put on one hell of a show.
The women danced the stick dance and a group of men did the Haka.

Puss-in-Boots
Queensland, Australia
I've now semi retired but still work from home. I live on acreage in Queensland with great friends and family nearby. I love my life and hope to share some of it in this blog.