skip to main | skip to sidebar

Yes, it was this evening and what a wonderful spectacle. But I'll start at the beginning.

The actual show started at 5 pm, but as we were booked for "Tapis Rouge" (Red Carpet), we had to be there at four for drinks and nibbles, which was very nice. There would have been about 30 of us...yes, quite exclusive. The finger food included little Vietnamese vegetable parcels in rice paper, pork dumplings, small savouries with chicken, smoked salmon and cream cheese, goats cheese and beetroot, and there were also mini pizzas...there was plenty of everything. I had white wine but Margaret (my friend who came with me) had champagne. There were souvenirs on sale so we had a wander round and looked at those. I rather thought I'd like a mug as a memento, but decided to get it after the show.

We were all given passes to wear around our necks which admitted us to the Tapis Rouge tent and to our seating area. While we were sitting and having our finger food and wine, we were also given a booklet of photos, cast list and so on as a keepsake. Finally, we were given the nod to make our way towards "Le Grande Chapiteau" (The Big Tent). Our seats were front row, right in the centre. First class seats. The pre-show entertainment started with mad Italian clowns. And they were crazy...no one can do crazy like the Italians...only one of the clowns was a Brisbane-ite, Hayden Spencer. They ran amongst the audience creating havoc and causing fits of laughter. They weren't dressed as traditional clowns, rather, in ordinary clothes that had been redesigned, for wont of a better word, but it really couldn't be called sartorial elegance.

Anyway, the Spencer Hayden character ran along a row of the audience about eight up from us. He had something in his hand, which we couldn't see. The next thing, he took off along the row and there was a ripping sound as he went...he had run a length of tape along the people in that row, at about chest height, effectively taping them to their seats. After more mayhem and mishaps from the crazy Italians (and one Australian), the lights dimmed, the music started and the show began.

Where do I start? It was an absolute spectacle, in the fullest sense of the word. The costumes were incredible and so colourful. The feats those talented acrobats and aerialists performed were jaw dropping and I couldn't help wondering how many hours a day for how many weeks, months and years they had trained. As for the music...words fail me. No prerecording or miming here...it was all live, the orchestra and the singers, and was out of this world (I think I'm running out of superlatives).

So...what's it about? Here is a small excerpt from their website:

Dralion is the 5th Cirque du Soleil to visit Brisbane. It is a celebration of the four elements that maintain the natural order: air, water, fire and earth.

Bearing the unmistakable avant-garde signature of Cirque du Soleil and featuring a total of 65 artists from 14 countries, Dralion will define new heights of acrobatic creativity with its unique and exciting acts.

Of course the crazy and colourful clowns also return, adding more than a touch of madness and audience interaction.


This photo is one of the four Ceremonial Lions that are in the show (this and the following picture courtesy of C du S website). 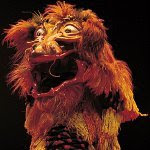 Below is something you are likely to see...and it's just one of the amazing feats the talented artists perform. 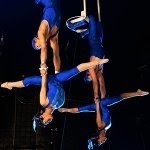 At half time, we went back to the Tapis Rouge tent for more nibbles and drink. We both decided to have tiramisu...and it was soooo delicious. Margaret had coffee and I had a glass of wine. As we made our way back to the show, we were given a CD of the show's music. Both of us were quite thrilled with that.
Then the second half began...and it was even better than the first half. We were quite expecting some of the acrobats to land in our laps and the aerialists flew way out over our heads. But, I must tell you something amusing. When one act finishes, another comes on immediately and draws the eye to them while the previous act is exiting, moving their equiptment, etc. Right above our heads was the centre of the tent and it's also where the artists would suddenly drop down from, either unwinding themselves from long swathes of fabric, or dropping down rapidly like a spider does from its web. After one airborne act, I didn't watch the new act, but kept my eye on the aerialist as she was drawn up into the dark heights of the tent. Suddenly I saw a long handle with a hook shoot out from the side and her support wire was hooked in, dragging her swiftly over so she could release herself. It looked really quite funny. Presumably there was a hand on the other end of the handle, but from where I sat, it appeared from nowhere.
Too soon, the show was over...and it was sad in a way, because this was the final Brisbane performance. Their next stint was on the other side of the country, in Perth in Western Australia. Needless to say the cast, orchestra and technicians all received a standing ovation. Richly deserved, too.
We ambled back to the car, but on the way, I remembered to get my Cirque du Soleil coffee mug. We had the most wonderful evening and the red carpet treatment certainly was. We both felt very special.
So thank you to my dearest daughters for the most wonderful birthday present I've ever had. 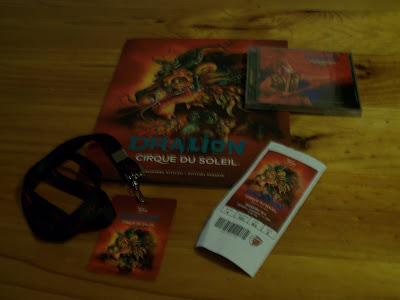 Above L to R: My pass, souvenir booklet, the CD and my ticket. 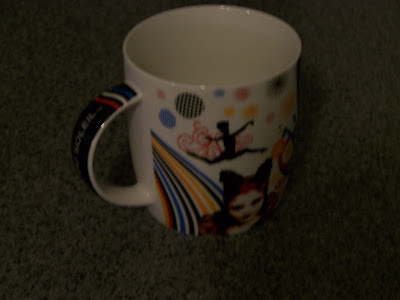 The coffee mug I bought. Sorry the pictures are so dark. I think my camera batteries are running down, the flash didn't seem as bright as usual.

That sounds as a wonderful evening you had ! I love these shows too.

I'm so glad you had a wonderful time. It sounds amazing.

Cool! So glad you and Margaret enjoyed yourselves :)

What a great night out, I hope to see them one day.

Gday Robyn. Wow great pics.
Sounds like you had a great night .I might get to see them if they ever come to Yarra.Cheers\_/\_/

That's once in a lifetime star treatment Robyn. You must have felt like a Hollywood starlet being spoilt like that. Well deserved too I have to say.


I have seen a couple of specials on TV about the Cirque de Soleil but have never managed to get to a performance. Thanks to your glowing review I may have to rectify that soon.

Sounds like a great time was had and you came home with and treasures to help remember your night.
They do put on a great show.

I'm finally coming around to visit...no more cleaning for me for a couple of days, I'd rather be blogging! lol My kitchen is now sparkling and decluttered from top to bottom so the rest of the house can wait a few more days:-)

I've often heard of Cirque du Soleil and how amazing they are but have never had the privilege to see them yet. Sounds like you had an absolutely wonderful time and it's no wonder you hated to see it end. I'm thinking that the next time they come around nearer to me, I'll definitely make the effort to go see them!! xoxo

Puss-in-Boots
Queensland, Australia
I've now semi retired but still work from home. I live on acreage in Queensland with great friends and family nearby. I love my life and hope to share some of it in this blog.